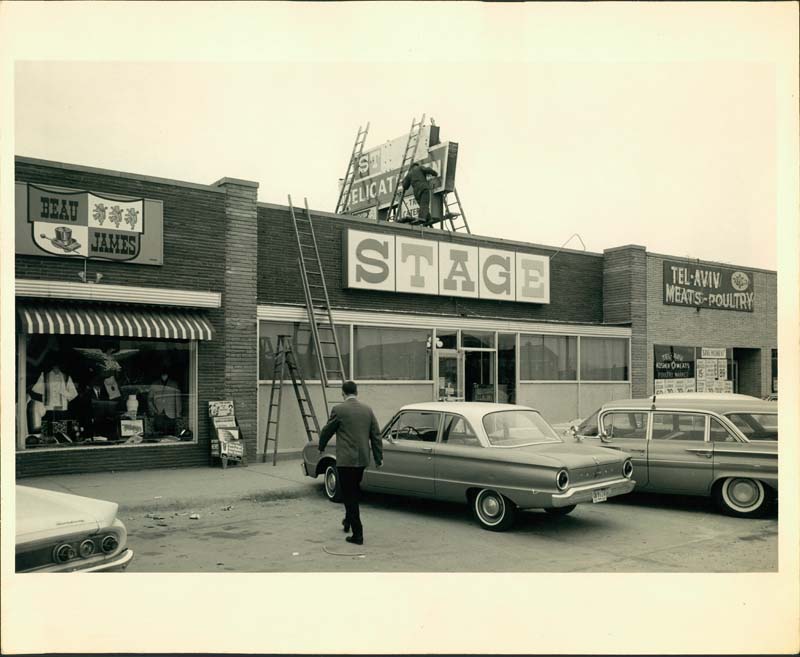 Jack Goldberg fulfilled his life-long dream when, together with his wife Harriet, he opened the Stage Deli on Nine Mile Rd. in Oak Park, Michigan.  If anyone had the pedigree for this venture, it was Jack.  He inherited a rich tradition of traditional Jewish cooking from his mother who’s stuffed cabbage, kreplach and blintzes were legendary.  As a teen, Jack trained in the halls of Detroit deli greatness such as Ben & George and Hy Horenstein.  These culinary chops together with his depression era drive to provide a better life for those close to him pointed him inexorably to Deli success.

Armed with this experience and a certain bravado, Jack conceived of a delicatessen & restaurant above the rest.  The corner deli meets fine dining if you will.  Complete with upscale interior, fancy uniforms & a flair for service, the Stage was clearly ahead of its time.  Lined up since its opening in 1962, Jack seemed to have got it right.  Of course he could not have done it without the deft hand of wife Harriet Victor – the consummate schmoozing hostess.

The Stage in the ‘60s was the kind of place you could expect to see movie stars of a certain era canoodling in a corner booth listening to the sounds of live jazz and noshing on chopped liver. The nearby Northland Playhouse drew sizeable audiences to their Broadway quality productions with stars of the day like Caesar Romero, Shelly Winters and Jayne Mansfield (Jack’s favorite).  Their favorite after-production haunt was invariably the Stage Deli on 9 Mile escorted by local bon vivants Joey Nederlander and Tavie Stone. Click here to view the Stage in its vintage heyday.

The Stage has come a long way since those halcyon days.  A little less glitter perhaps, but all the schmooze!  Under the watchful gaze of Jack’s son Steven the Stage is now into it 6th decade serving the Metro Detroit community from its current haunt on Orchard Lake Road in West Bloomfield.  Completely redone in 2009 the Stage today is an apt reflection of the Stage Jack envisioned over 50 years age…a cut above the rest.  In fact, it has become a Goldberg family way of life with Steven’s children, the third generation, becoming active in today’s business.

While the Stage has changed over the years to stay ahead of history, one thing has always remained constant…the Goldbergs’ dedication to the Stage mission.  That mission, to serve only the finest traditional and modern Jewish Deli hand-crafted on site, served with abundance, respect and style remains our guiding light.  As we enter our second half century of business, we invite you to join us in celebrating Jack’s vision.